The weather cooperated for the 2nd annual Outer Battery bbq on Sunday.  Great Big Thanks to everyone who helped make it possible.  Thanks to the musicians: bagpipers Ean Parsons & Dave Allison, box player Frank Maher and his concertina friend, bodhran player Rick West, fiddler Christina Smith and her friend, and of course to Mike Walsh for playing Ugly Stick.  Also thanks to Belbins Grocery, Dominion & Sobeys who donated some of the food. If anyone took photos please send them along and we'll put them up here.  Dominique Hurley (www.DominiqueHurley.com) took this pic: 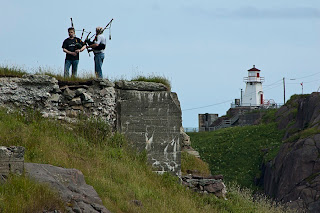 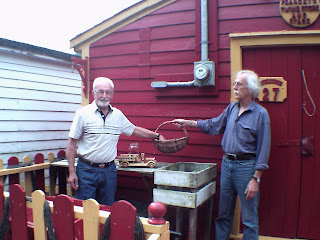 The magnificent wooden firetruck model made by you-know-who was up on separate tickets, and Carl Pearcey drew the winning ticket: Lee-Anne Facey-Crowther.  The draw raised $282 for the summer heritage project (Lisa & Annie). Thank you Carl.
And a new sign has been placed on our signboard.
Posted by Outer Battery Neighbourhood Association at 18:06